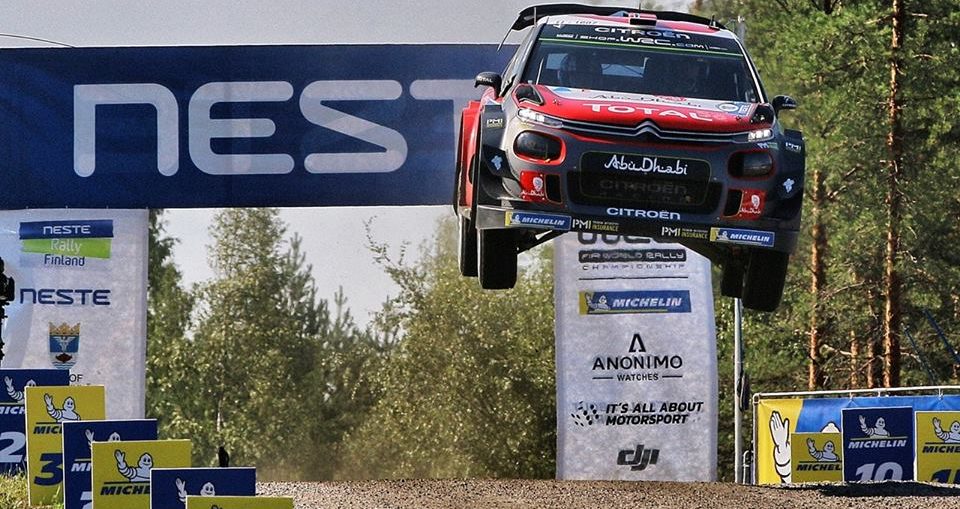 With an impressive haul of four stage wins, the C3 WRCs blasted through day one at Rally Finland! After topping the timesheets three times and holding the overall lead on four stages, Mads Østberg and Torstein Eriksen ended the first leg just 5.8s off the pace. Craig Breen and Scott Martin recovered from an early puncture to end the day in ninth overall, picking up a fine stage win in the process, whilst Khalid Al Qassimi – Chris Patterson focused on their target of racking up the miles on their return to the WRC.

Consisting of ten stages, some never contested before, over a competitive distance of 127 kilometres, today’s first leg presented the crews with a very serious opening challenge.

“The best car I’ve ever had at this rally” was how Mads Østberg described the C3 WRC after his pre-event test. And yet, this is his thirteenth appearance here! The Norwegian wasted no time in following up his words with actions: a second fastest time on Moksi (20.04km), just 1.3s off the pace, immediately put him in second position. He went one better on SS4, with a stage win that took him into the overall lead. Although he briefly slipped to second on SS5, he moved back into the lead at the start of the afternoon loop with two consecutive stage wins (including 1 tied) on the two longest stages of the day. The only driver truly able to live with Tänak’s blistering pace, he ended this very strong opening leg in second position, 5.8s behind the Estonian.

Craig Breen had a more difficult start to the day, losing 47.8s with a puncture on the first stage. The Irishman bounced back on the next stage to set the second fastest time. He refused to let his head drop and set about trying to pick off his rivals one by one, scoring an impressive stage win on SS8. He had shown his equally strong pace in fighting back up to ninth overall, 1:07.3 off the lead, when unfortunately he suffered a fuel feed problem on the final stage, which cost him almost thirty seconds.

Meanwhile, Khalid Al Qassimi is 24th overnight, having spent the day focusing on getting his bearings back in the car and racking up the miles on these particularly demanding roads. He also suffered the same fuel feed issue as Craig Breen on the final stage.

Second to last driver to tackle the stages tomorrow, Mads Østberg will therefore be ideally placed for the intense scrap that looks set to rage on the longest leg of the weekend. With 142.86km of stages against the clock, the leg will see the crews fight it out twice on Kakaristo, i.e. the revised version of the famous Ouninpohja stage…

“Obviously, it has been a positive day for us, given the four stage wins, which confirms both the quality of our car and our crews. Mads has been the only driver to match the pace of the leader of the local team. Unfortunately, Craig’s rally was dealt a body blow at the start but he reacted very well and he can still do some good things here.”

“In terms of the times, we had a good rhythm and overall, it was a good day. Obviously, it’s frustrating to have picked up a puncture this morning and then to have had the fuel problem this evening, but that’s the way it goes, I guess. It’s gone now, so we’re already focusing on tomorrow’s leg. We’ll try to enjoy ourselves on these magnificent roads and do even better.”

“I’m delighted for everyone in the team that I have managed to produce such a solid performance. We have all worked so hard together in order to make it happen. I really enjoyed driving my C3 WRC throughout the whole day. We are now going to try and keep it up tomorrow!”

“I really liked the fast, typically Finnish stages. Less so the stages that were very narrow and rough, but I adopted a cautious approach in these sections in order to keep out of trouble. I’m going to try and up my pace during the rest of the rally.”

FOLLOW OUR ROLLING STORY FOR KEY DAKAR RALLY 2023 UPDATES AS THEY HAPPEN.

FOLLOW OUR ROLLING STORY FOR KEY DAKAR RALLY 2023 UPDATES AS THEY HAPPEN.